When I take a break from training Muay Thai I like to play some action games. And like you've probably already guessed my favorite genre are beat 'em ups, especially Muay Thai games.

I would like to share with you a list of my personal favorites. Some of them are pretty simple games with just basic striking and blocking. Other titles are much more sophisticated and provide the player with a very broad arsenal of strikes and combos.

What connects all those games is that they have at least one character fighting with Muay Thai style. 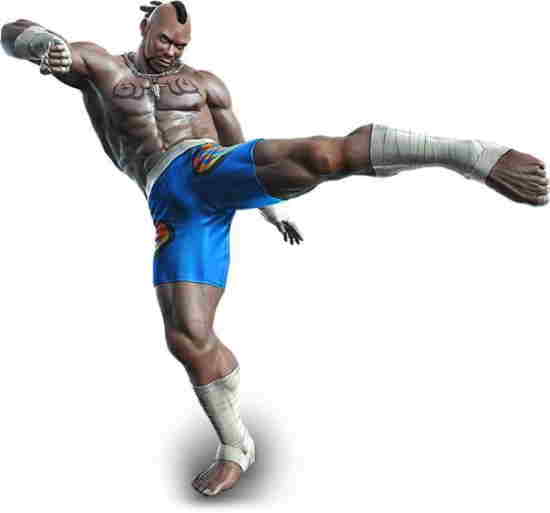 
Bruce Irvin is one of the most powerful characters in Tekken. He became my favorite fighter since Tekken 2.

He has a wide arsenal of Muay Thai strikes and combinations. His fighting style is not very traditional yet very effective. Bruce is a very spectacular fighter and one of the strongest characters in the series.

You can find him in Tekken 2, Tekken Tag Tournament, Tekken 5, Tekken 6 and


Another great example of a Muay Thai fighter in a video game is Brad Burns.
He was introduced into the series with Virtua Fighter 4 Evolution

on PS2 and arcade. He also appeared later on in Virtua Fighter 5

Brad is a bit cocky Italian Muay Thai practitioner who has got a full arsenal of Muay Thai techniques at his disposal. He utilizes knee strikes, elbow slashes, and round kicks. His movement is fast and smooth. He moves like a cooler version of Bruce Irwin from Tekken series.

Joe Higashi in Fatal Fury and The King of Fighters


Higashi is a Japanese fighter who fights in Muay Thai style. It is a bit unusual combination but it works very well for him. Higashi first appeared in a classic Fatal Fury: The King of Fighters on SNES and Sega Genesis/Mega Drive in 1991.

The last game featuring Joe Higashi was King of Fighters XIV released in 2016.

No, Sagat is not a motivational speaker. He is a towering Thai fighter with a distinctive Muay Thai technique featured in a Street Fighter series.

He was named after Sagat Petchyindee, 3 times Lumpinee stadium champion and one of the best Muay Thai fighters of all time.

Street Fighter is an iconic 2D beat 'em up game with loads of devoted fans all over the world. If you like classic 8-bit and 16-bit 2D games this will be your favorite martial art game. If you don't know it yet, you've got a chance to play it for free.

And if you are an old fan of the series, you can refresh your fond memories and get a chance to test your skills.


Muay Thai Origins is a free Android martial arts game with a crisp 3D graphics and with a traditional Thai music [Sarama]. You can choose between multiple Thai fighters with a different statistics.

The combat system in this game is very dynamic but it is definitely something to get used to on, especially when playing on a touchscreen. You will have to decide for yourself whether you like the mechanics of this game or not.

You can strike by tapping your opponent's body and when the red power button builds up you can unload a special move. You will also get to throw extra powerful kicks from time to time (for which you'll have to press the button at the bottom of the screen).

You can download this game for free on your mobile phone and tablet. The only downside of this game is that you'll have to watch ads between each fight. Nevertheless, I think this game is one of the best free Muay Thai games on android.


Muay Thai v3 is a third in a series of simple flash Muay Thai games. If you've ever played a Double Dragon or any other 8bit beat 'em, then you are home with Muay Thai v3. It also has an original Thai music score which is a big plus.

Gameplay is based on simple strikes: Kicks(C), Punches(X) and Blocks(Z). To perform special combos you'll have to use arrow keys combined with Kicks and Punches. This game is free to play and you can enjoy it in your browser.


Also take a look at: