What's the difference between Muay Thai and Muay Boran?


Muay Boran is an army combat system and a predecessor of Muay Thai. It was born in ancient Siamese Ayutthaya Kingdom.
Muay Thai is a “sportified” version of Muay Boran with different rules and slightly different fighting techniques.

You can think of Muay Thai as of a softer version of Muay Boran which was created for a modern ring competition and not for an XVI century battlefield. 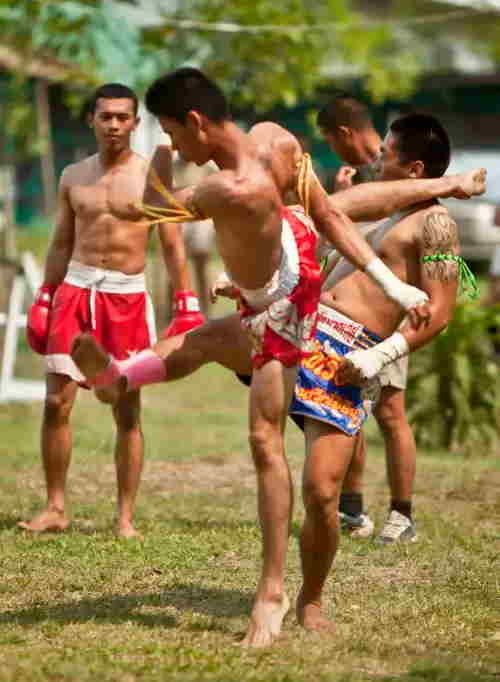 What methods are there to strengthen the shinbone for Muay Thai?


Is the Flying kick effective in a fight?


Yes, it is. As a matter of fact, when a proper flying knee makes a contact with an opponent’s chin it’s an instant KO. You may be in trouble if you miss a strike cause after landing on a ground you’re vulnerable to counter-attack.

All in all, you can win more than you can lose if you are good at throwing it.

Read more about an Advanced Muay Thai moves and techniques


What should I wear to a Muay Thai class?


You should wear a black tank top and a gold flamboyant Lumpinee Muay Thai shorts :-) Seriously though, most of the good gyms will provide you with vest and shorts with gym emblems.

Most of them will even have a gear which you can borrow for training which I don’t recommend you to do unless you’ve got no other option. The thing is that if you’re serious about your training you should bring your own gloves and elbow/shin pads. I wrote a post about what kind of gear you’ll need for training and what to look for when buying it.

How long does it take to become good at Muay Thai?

A philosophy of a Muay Thai, which you can trace to Thailand and Thai traditions, is based on competition: to prepare fighters to compete with the others, to be a ring ready fighter. Muay Thai gyms will follow that philosophy. In most of the good gyms a great pressure input on sparring and full-power sparring as a main tool of teaching (and learning).

Like you probably know, there is no belt system in Muay Thai so instead of inter gym competitions will give you a sense of progress and achievement.